Questions about a sermon? Ask the pastor:  pastor@camphormemorial.church 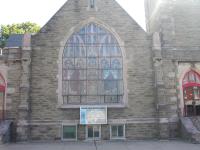 
Bishop Alexander Priestly Camphor*
Alexander Priestly Camphor was born in 1865 on a sugar-farm in Louisiana to humble but devoted parents.  He never saw a schoolhouse until he was ten years old.  His mother and father could neither read nor write but believing that there were great possibilities for their son, loaned him to a Methodist preacher to raise and educate.  He was placed in a Freedman's Aid school where he began his preparation for future work.  He learned quickly and easily and graduated from the New Orleans University (now Dillard University) at the top of his class.  He had so excelled in scholarship and character that he was asked by his Alma Mater to chair the Mathematics department.  It was during his four years as a teacher that the obligation of educated Negroes to help save Africa was laid upon him through the suggestion of Bishop Williard F. Mallalieu in New Orleans.  He organized the first "Friends of Africa" organization on the campus and soon there were chapters at all schools under the direction of the Freedmen's Aid Society of the Methodist Episcopal Church.
After four years of successful work at New Orleans University, Mr. Camphor entered Gammon Theological Seminary in Atlanta, GA in order to better prepare himself for his life's work where he also graduated at the top of his class.   Thereafter Rev. Camphor became a pastor in Philadelphia and later in Orange, NJ, when he did post-graduate work in Columbia University and Union Theological Seminary in New York City.  Upon the nomination of Bishop Joseph Crane Hartzell, a former Corresponding Secretary of the Freedmen's Aid Society and Bishop of Africa (also forefather of Africa University in Zimbabwe), Dr. Camphor was selected Principal of Monrovia Seminary in Liberia in 1896.  He brought new life to the Seminary (then an elementary school) and by the close of his first year of administration he had begun the reorganization of the school to a high school, normal and ministerial training institution. At the 1897 session of the Liberia Annual Conference, it was voted to transform the Monrovia Seminary to the College of West Africa (CWA) and that CWA be made the one central and leading school of all Methodist educational institutions.
For 10 years, Dr. Camphor and Mrs. Camphor, who was constantly by his side, helper and companion, worked tirelessly to realize these goals. The college was recognized by the Liberian Government and in 1904 was chartered as the College of West Africa by the legislature.  In this appointment Dr. Camphor and Mrs. Camphor became the first regularly appointed colored missionaries of the Board of Foreign Missions to Africa.  See history of the college on web page of CWA Alumni, USA Chapter.  It was also during this time that Dr. Camphor made several visits to the interior and wrote, "Missionary Story Sketches and Folk-Lore from Africa."  In 1903, President Theodore Roosevelt appointed Dr. Camphor his Vice-Consul General in Monrovia.  Dr. Camphor served in the dual capacity as American diplomat and missionary until he returned to the United States in 1908.
In 1908, Dr. and Mrs. Camphor returned to the United States upon his selection as President of the Central Alabama Institute in Birmingham, Alabama, where he served until his election and consecration to the office of Bishop for Africa by the Methodist Episcopal Church in 1916.  Bishop Camphor was bestowed the honorary degrees of Doctor of Divinity by New Orleans University and Gammon Theological Seminary.  A residence, Camphor Hall, erected in 1947 on the campus of Dillard University, was named in honor of Bishop Camphor.  He will long be remembered as a thorough scholar, an eloquent preacher, a splendid administrator, and a man of the highest integrity and tenderest love.  In 1923, the name of our church, St. Matthew Mission, was changed to Camphor Memorial Methodist Episcopal Church, in honor of this great missionary and educator.  A photo of Dr. Camphor is included in our Photo Gallery under "Former Pastors of Camphor."

*(Adapted by Carol A. Black in part from "Introduction" by Rev. M.C.B. Mason, D.D. to Alexander P. Camphor's Missionary Story Sketches and Folk-Lore from Africa, (1909).

The Mission of Camphor

improve the quality of life in the community, city and world.

A Short History of Camphor

Our History and Tradition
Camphor began in 1922 when Rev. William Casey, pastor of Calvary Methodist Episcopal Church (now Tindley Temple) and his wife, Catherine, opened their home at 5832 Filbert Street to a small group of neighbors forBible studies and class meetings as there were no Methodist churches in the West Philadelphia area. The following year, the Board of Home Missions appropriated funds to establish six missions in West Philadelphia, including our small "Saint Matthew Mission". At the Annual Session of the Delaware Conference in 1923, the name of the St. Matthew Mission was changed to Camphor Memorial Methodist Church in honor of Alexander Priestly Camphor, the 4th African-American to be consecrated a bishop by the Methodist Episcopal Church. Our first pastor was Rev. William E. Hilton and our first worship service was held on December 9, 1923, in a leased "store front" at 5818 Vine Street.

The membership grew rapidly and in May, 1924, Camphor purchased a lot at 58th Street and Haverford Avenue and soon thereafter built an edifice which would become known as "Little Camphor." After the Depression, Camphor blossomed under the dynamic leadership of Rev. Marion Clark, Rev. Noah Moore and Rev. Daniel Rideout. The present sanctuary and buildings were acquired in January, 1943, and the church hosted the Annual Session of the Delaware Conference in 1944. When Rev. Marion Ballard was appointed pastor in 1959, membership had swelled to 922. In May, 1965, Camphor along with 20 other African-American churches in Pennsylvania that were part of the former Delaware Conference in the Central Jurisdiction of the Methodist Church, became charges of the Philadelphia Annual Conference. Since 1969, with the merger of the Methodist Church and the Evangelical United Brethren Church, Camphor has been a premier church in the Eastern Pennsylvania Conference of the United Methodist Church.

The Camphor Council for Community Development (CCCD), a non-profit corporation, was organized in 1985 to acquire vacant properties in the community and renovate them into homes for deserving families. A Five-Year Ministry Program was developed in 1989 and a Planning Conference was convened annually to develop specific action plans to achieve the goals of the Five-Year Plan in the areas of church growth, youth involvement, outreach ministries, stewardship, training for laity and development of new leaders, and increased spirituality in the church. In February, 1999, Camphor celebrated the gala grand opening of the Camphor-Brooks residence, a $4.3 million renovation of the former Brooks School into 33 senior citizens apartments through a joint venture with CCCD and the Ingerman Group.

Our current pastor, Rev. Dr. Frank N. Moore, is a capable and spirit-filled leader who continues to engage and empower us in strengthening our discipleship, developing new ministries and revitalizing existing ministries to meet the changing needs of our community and diverse congregation.